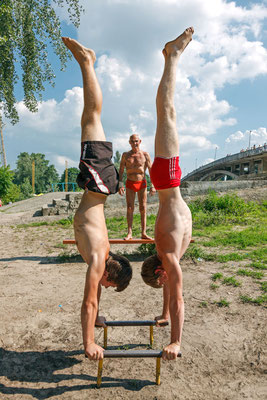 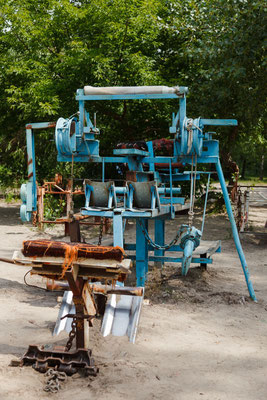 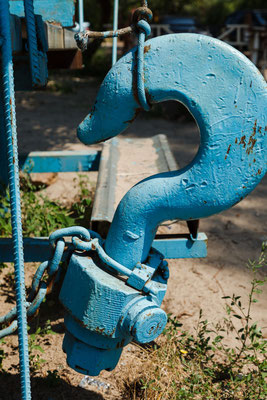 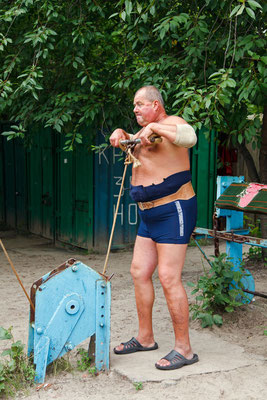 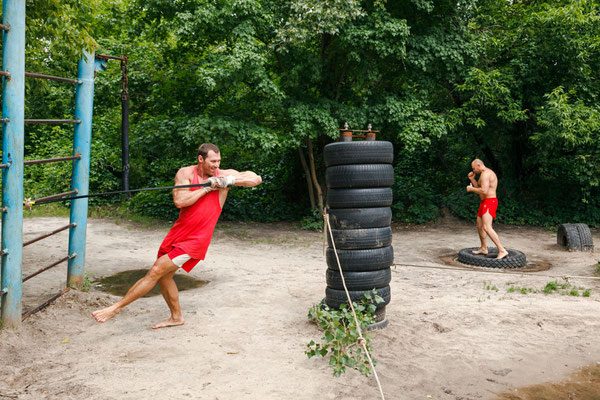 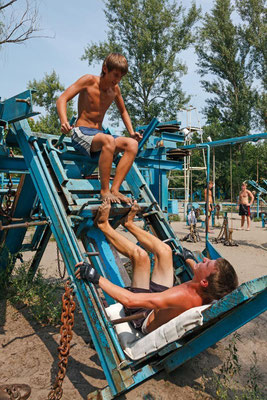 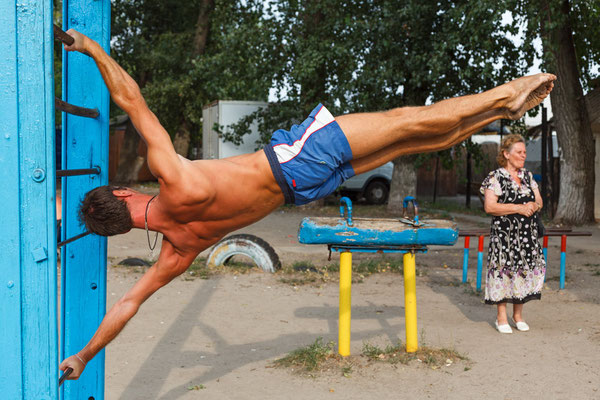 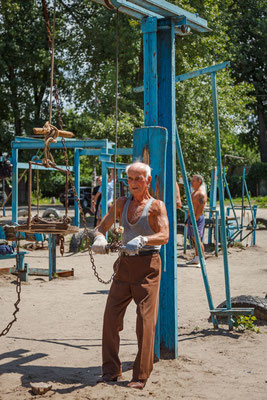 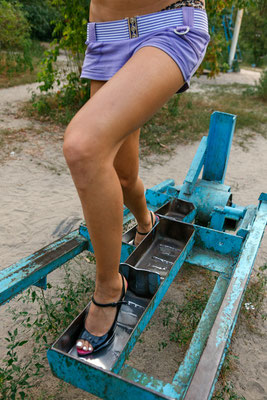 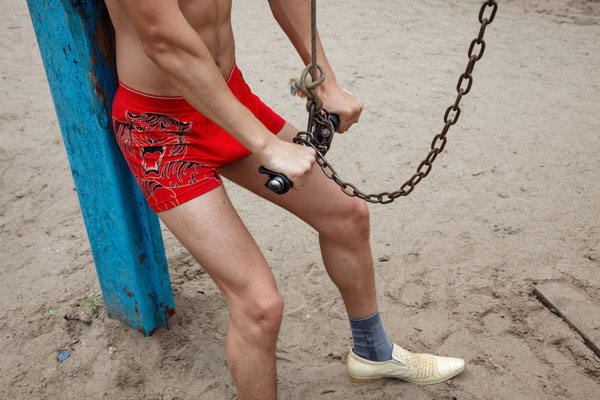 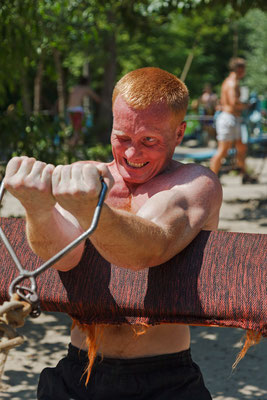 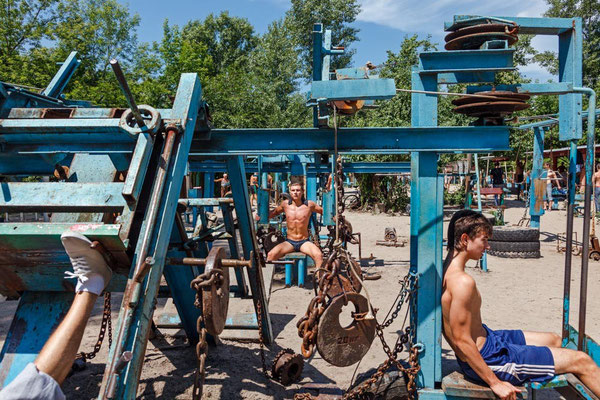 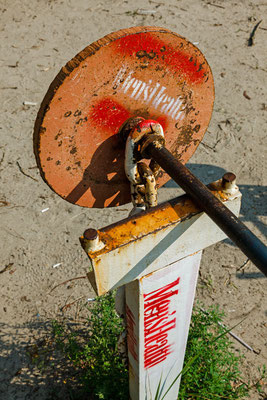 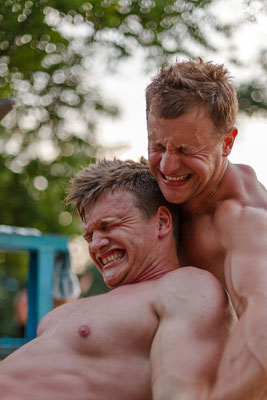 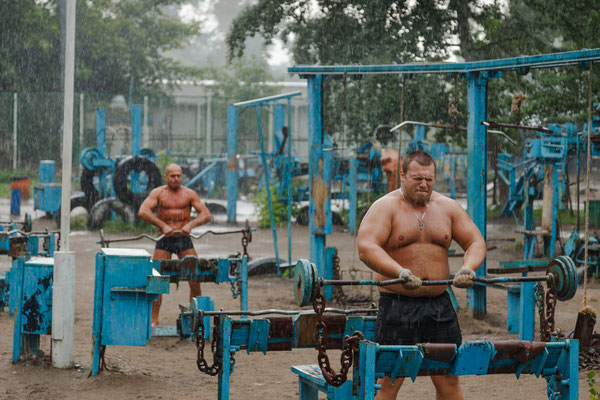 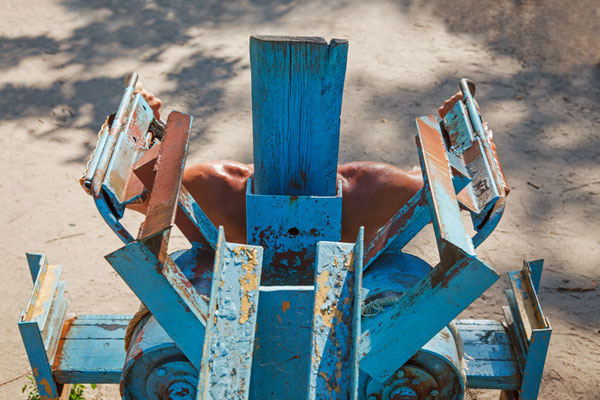 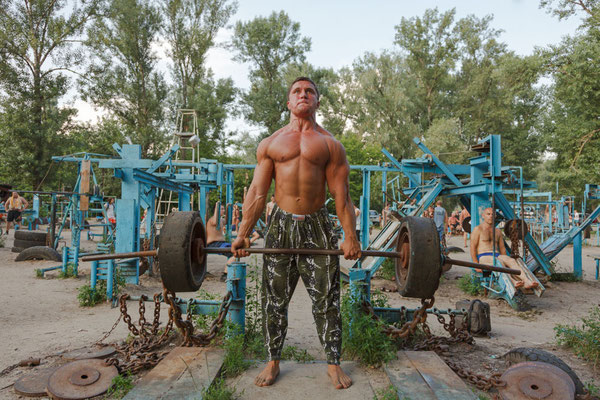 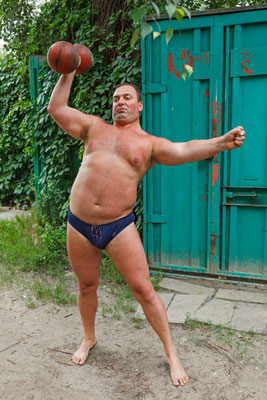 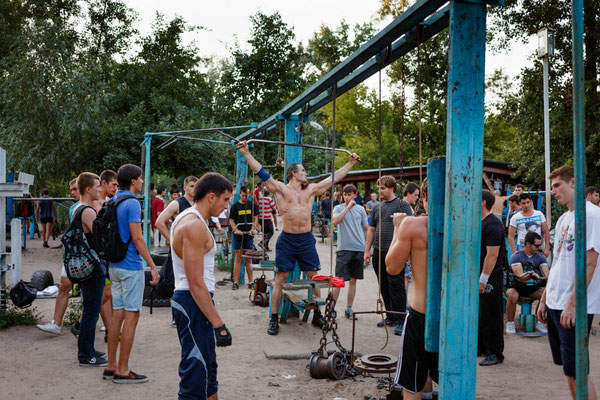 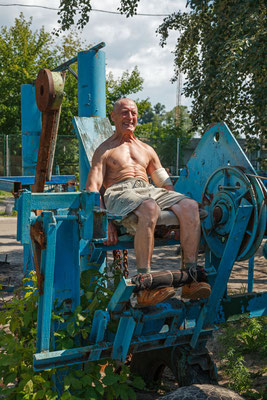 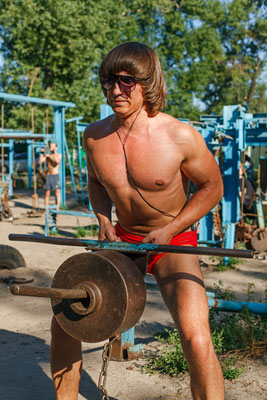 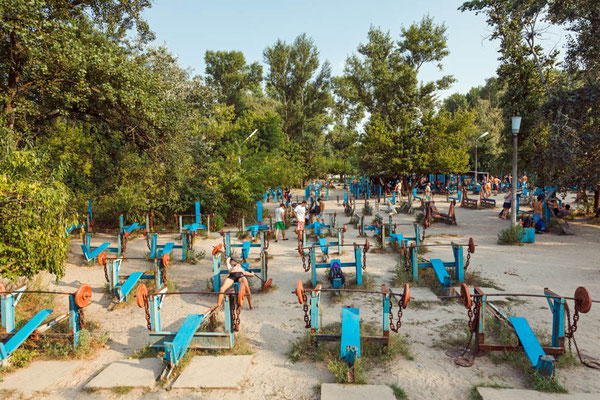 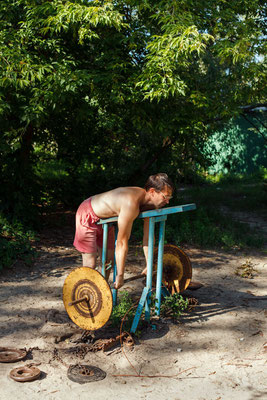 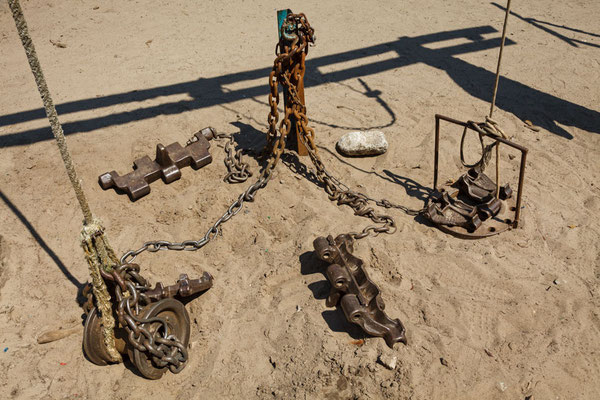 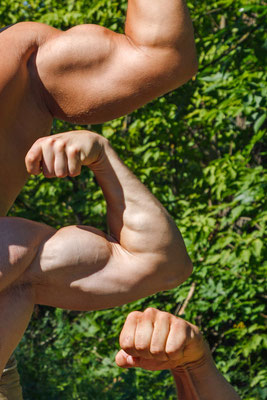 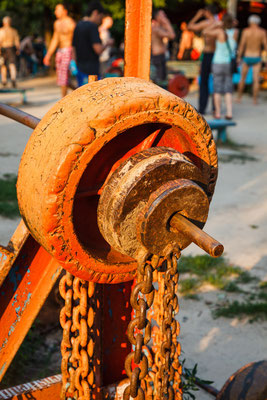 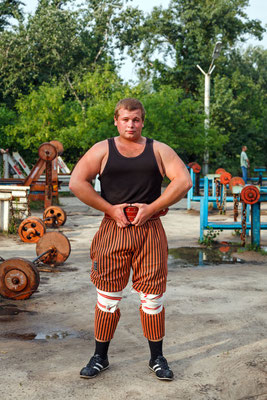 Another Type of Democratic Forest*

Kachalka jumps across my tongue and pumps it way through my ears like a cheerleading riff, anticipating the exhilarating action to come. Listening to photographs is one way of interpreting how much an image can tell you. But there’s no need to place your ear to this book … just look. The exasperated faces and bodies in the midst of forcing — holding — CLUNK. On the cover of Kachalka, WWI imagine what type of music the bodybuilding sports enthusiast is listening to, simply by virtue of his hairstyle. It is the faces and bodies of the regulars, newcomers, elders and youth that enliven this orchestra of iron, trees and sand. Kirill Golovchenko prepares this documentation in a very classic photographic manner for his viewer to experience the Kachalka of Hidropark. He photographs cryptic overviews of the place, subliminal scenarios with more than one player, unstaged environmental portraits and still lifes without blossoms.

As unique or unearthing that his themes may be, he has mastered capturing irony that is universal, be it critical or humorous. The first objects of interest for Golovchenko at the Kachalka were not the seas of “democratic” sweat, but the weathered machinery and the odd, haphazard way it is held together in many places: the rusty chains securing the workout stations, the discarded heavy industrial parts from non-sport manufacturing factories being recycled into weights. In one of the photographs of the grounds, he opens our eyes to understanding the complexity of the space the park inhabits. The point of view highlights patterns of worn earth, greenery or sky at first impression. The sandy surface in the middle of a forest stretches well over two football fields. It is compact with rows of light blue painted benches and supports,weighted down by transoms bolted with oxidized orange disks. Patches of grass are thicker under the less frequented stations. Initially, the human presence seems scarce. We are drawn to the central male figure working out in the foreground who seems to have overestimated his strength … as his bar takes a dip. The dip pushes us over to the right where we notice gatherings of different sorts, waiting, walking, resting, pumping, watching or relaxing in the shade. We are at a park and it is summer. The photographic perspective not only gives the viewer a summary, but also additional intricacies that spark our curiosity.

Golovchenko visited this Island in the Dnieper River five times between 2010 and 2012, resulting in a five-week observation of the open-air oasis. Remarkably, his subjects were for the most part very cooperative. Although he had had his own youthful ambitions to have big muscles, he was not forced to work out when he was shooting here on location. Muscularity and fitness is not his central theme while photographing the Kachalka, but to show how in this somewhat tarnished and self-made place many needs are being met. By photographing over several visits, his visual interaction became manifold: from his interest in inanimate objects on his first visits to finally grasping and capturing the diverse social responsibility that the Kachalka offers. It is a social meeting place. It is also a place where frustrations are worked out and dreams might begin.

Kirill reports through his photographs what this place is and at how beloved and serious this unique Ukrainian sports oasis is for its users. He came across the fitness area while working on another series, “The Ukrainian Breakthrough,” enabled through a stipend from the Wüstenrot Stiftung for documentary photography. By borrowing the title from a government slogan from the 2008 – 2010 period, his visual statements at that time questioned the meaning of the original promise of the country’s leaders “… for the people, not for the politicians.” This political campaign was established to promote affluence throughout the country. Golovchenko’s “The Ukrainian Breakthrough” reveals the contradictions of a country in transition. The improvements to the country’s social and economic landscape are documented as backdrops of thriving materialism where the players seem out of place. The Kachalka as a photographic subject may have been spawned by the “Ukrainian Breakthrough” project but it is not

part of it. Kachalkas have been around since the 1970s and have nothing to do with affluence, but the individual urge to improve oneself physically … or pump, pump it up.

The fact that there is no dress code is particularly enticing and obviously one of the truths which the photographer also felt important to document. When he photographed for his first published book 7 km Field of Wonders, revealing Europe’s largest shopping mall, housed in 70 hectares of cargo containers and tents on the outskirts of Odessa, the importance of fashion or brands was essential to show. In Kachalka this is not important. High heels or sneakers, boots or flip-flops; swimming trunks, beach shorts, suit-pants or mini-skirts or official workout gear…from whatever decade or century…you are responsible for whom you are and accepted for it. That tradition from more “affluent” cultures of the “branded” uniform, is, at least here at the Kachalka, Hidropark, Kiev, not yet so wide spread. The photographer has selected only two photographs of such examples of showing off logos in two still lifes: a body builder’s 1980 Olympic towel, which opens the story, and a stencilled “Men’s Health” Magazine
script onto a weight, which are codes to let us know that the management at Kachalka also has connections.


In Golovchenko’s own words about the Kachalka he claims his forest literally democratic and conceives his story around the aspects of diversity and social equality. “The Kachalka is democratic — here everyone is on the same grounds no matter which social class they come from.” William Eggleston’s book The Democratic Forest from 1989 was published as the barriers of the former East Block began to crumble. Eggleston’s title refers to his particular southern pathos found equally distributed in everything he photographs — his “forest” — whether it is a deserted Tennessee road or the Berlin Wall. There are ranges of differences between these two photographers yet each encounters the place and its
remnants as allegories of their own cultural histories.